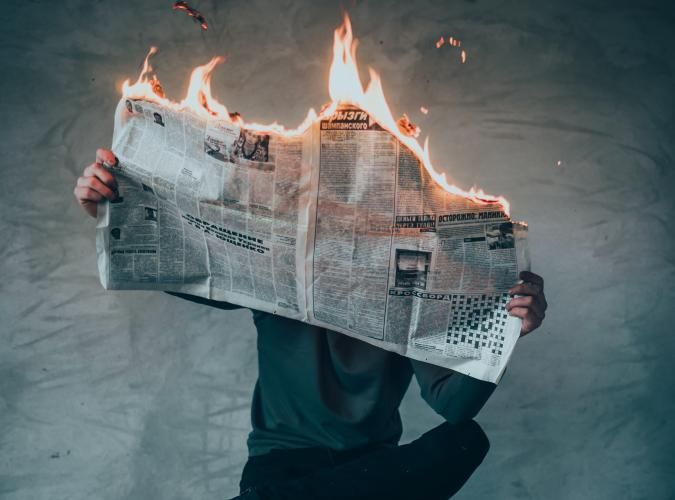 Every day it seems like the headlines are full of terrible stories: nuclear tests in North Korea, families being torn apart at the border, migrant and refugee children locked in cages, strongmen running countries, hostile governments attacking free democracies around the world, white supremacy on the rise, and shootings almost daily – just to name a few. What’s more is that the institutions that people once relied on to keep them safe are beginning to lose the confidence of the very people they protect.

As a result, some people around the world have been coping by shutting out the news completely. It’s easy enough to do: you turn away when you see a TV, you scroll past the articles before catching a glimpse of the headlines. It’s bliss.

For many, this feeling of anxiety or depression when watching the news is due to the extreme gravity of the potential fallout of these situations and the relative helplessness of the average person to affect any meaningful change in situations in which a select few seem to be pulling all the strings.

Self-care is not selfish

I’m not here to knock the people who choose not to watch the news. It makes sense. Sometimes it’s too difficult, too exhausting, too stressful, to get emotionally invested in every terrible story. In many cases it may be in your best interest to take some breaks from the news when it feels overwhelming. After all, you need to take care of yourself in order to be able to help others.

However, as a global citizen, I like to stay informed as much as I’m able and I do whatever I can to help remedy these situations with whatever little power I have. Even if this just means keeping the dialogue going with the people in my life to try to shake people out of apathy, and doing my part to ensure that the politicians who represent me also reflect my values. Fortunately, while keeping up with the news there is something that can soften the blow of all the tragedy: comedy.

As the onslaught of stories continues, I have found that the late-night comics who work tirelessly day after day to expose and ridicule the lunacy of the world we live in are a nice supplement to the barrage of negative news. It isn’t about laughing things off or accepting the state of things, but is rather about being reminded that what is going on IS absurd, that it ISN’T normal, and that the vast majority of people recognize that this is the case.

“That’s what I love about comedy, is it is a way to numb the pain, to process what we’re going through without feeling every single inkling of it” – Trevor Noah

Some say that we laugh so that we don’t cry, but I like to think that we laugh so that we can still experience joy in these trying times. As John Oliver dissects an important and yet mostly unknown and dangerous policy or practice, as Stephen Colbert blasts every serious political misstep while acknowledging the difficulty with which he himself takes in the news, as Samantha Bee refuses to pull any punches when talking truth to power, as Jimmy Kimmel advocates for basic human rights, they become more than just entertainers.

These comedians and so many others like them engage people – particularly the younger generations – in current events in a way that hasn’t been done before. And while they are the first to admit that they are not journalists, they do inform as well as entertain. They make you laugh, and if you need to cry because of the state of the world then in their audience you can hear the laughter of all the others who feel the same as you.

In the end, everyone has their own views and opinions on science, politics and religion, but we are all citizens of the same Earth. Sure, there are people out there who are greedier than others, more intolerant than others and more violent than others, but they will always be in the minority next to all the people who just want to live, be happy and secure a healthy life for themselves, their loved ones and their communities. Love does trump hate, and joy trumps sadness.

“I would say laughter is the best medicine. But it’s more than that. It’s an entire regime of antibiotics and steroids. Laughter brings the swelling down on our national psyche and then applies an antibiotic cream.” – Stephen Colbert

All this to say that while things around the world may seem dire, if you still want to stay informed by the news, then a bit of laughter to go with it can only brighten your day.

Need to talk to someone one-on-one?
Book a free session with Vent Over Tea today!

Eric graduated from McGill with a B.Eng. in 2015 and is now a junior engineer and volunteer listener with Vent Over Tea