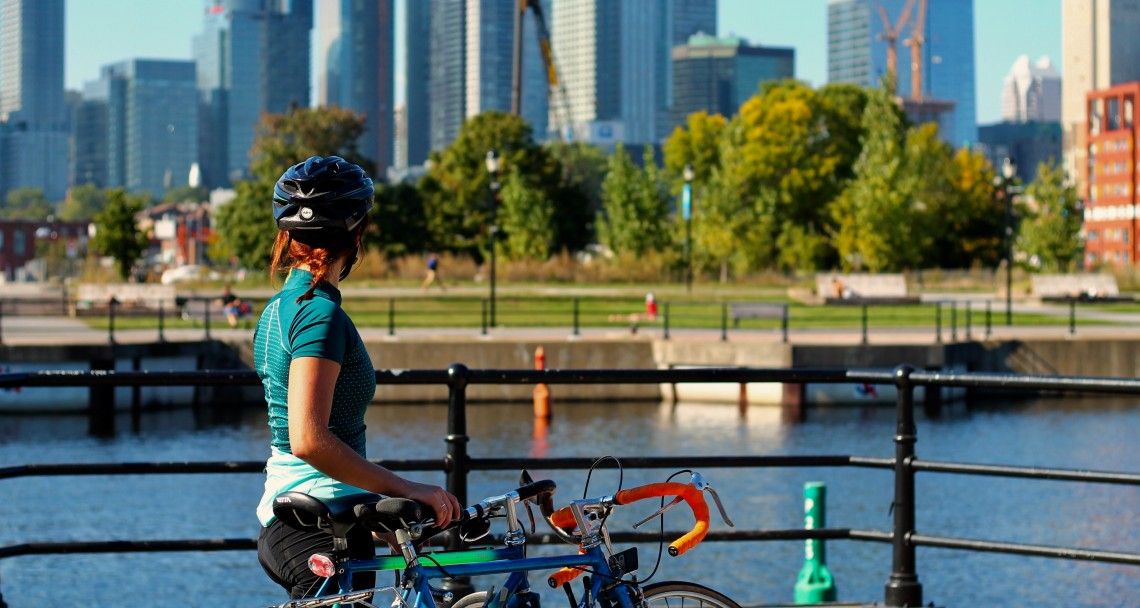 Why Cyclist Safety in Montreal is a Community Problem

Yesterday I was almost run over by a truck. I was riding my bicycle up the sneaky but ever-present incline of Boulevard St. Laurent and had nearly arrived at my office. My hair, tucked under my scarf, had become moist with the sweat from the back of my neck. I had started this ride chilled to the bone, but now was enormously uncomfortable and eager to strip off all the extra fall layers, make myself a cup of coffee, and begin my day.

The day that almost was not. It was at that moment that it came – a large white truck careening up the Boulevard, slicing the road from left to right in a dramatic diagonal, leading directly into the space I was a split-second away from occupying. I slammed on my brakes as hard as I could and had to lean sharply leftwards to avoid the rear corner of this obnoxious vehicle making contact with my (helmet-clad) head.

I caught my breath, in shock, and paused as the adrenaline pumped through my body, causing me to tremor. Funnily enough, the truck had not managed to make the next light – the reckless acceleration and careless lane change had been in vain. I hopped off my bike and pulled it onto the sidewalk, catching up to the truck on foot.

I debated whether to say anything or continue walking.

But the tragedy from two weeks ago was still heavy in my mind and I knew I had to say something.

I knocked on the passenger window. A middle-aged white male peered over from the driver’s seat. I motioned for him to lower the window and he hesitated, clearly debating whether or not this would be a worthwhile endeavor.

“You just almost ran me over! You HAVE to check your blind spot.”

A smirk spread across his face and he shrugged.

No remorse. A smirk and a statement that likely bore truth but lacked apology.

I stood there, fuming.

“That was terrifying. You really have to be more careful.”

Then, unbelievably, he laughed. He laughed and shrugged a second time, rolled up his window, and pulled away as the light was now green.

I didn’t cry when his truck almost made contact with my face, but his apathy made me tear. It stung.

Unfortunately, these incidents are far too frequent in Montreal. Every season, the newspapers are peppered with cyclist and pedestrian-related injuries or deaths. The most recent, of course, is the death of a young aspiring cyclist who struck a vehicle making an illegal U-turn. My own younger sister is so traumatized from being hit by a car while riding her bike in NDG several years ago that she hasn’t ridden one since.

Today we found out that the man who killed 18-year-old Clément Ouimet will be facing charges of criminal negligence. That is not justice – but if we are honest with ourselves we know that a lifetime in jail would not mend what has happened.

This kind of thing is best dealt with before it even has chance to occur.

I think these incidents are indicative of a problem that extends beyond reckless lane changes and forgotten blind spots. To me, these actions are symptomatic of a society whose members are not showing up to their community in a responsible way.

It is not healthy for us to prioritize getting somewhere quickly over the safety of our neighbours. It is not healthy to care so little about another human being, that you find it humorous that you almost ran them over.

We can be better. Here’s a little secret: It isn’t difficult to be a decent human being! Smile when you pass people in the street, (you could even try saying hello). Check your damn blind spot. Care enough about the people you share a city with to make this a safe place for people to do normal things like ride a bicycle or walk to work.

Being a good community member doesn’t necessarily mean volunteering at the local CSA and planting in the community garden, although those things are great and I encourage you to try them. Being a better member of your community can be the small things – the smiles, the thank yous, the door holds. It’s about caring for those around you – those you know and more importantly those you don’t.