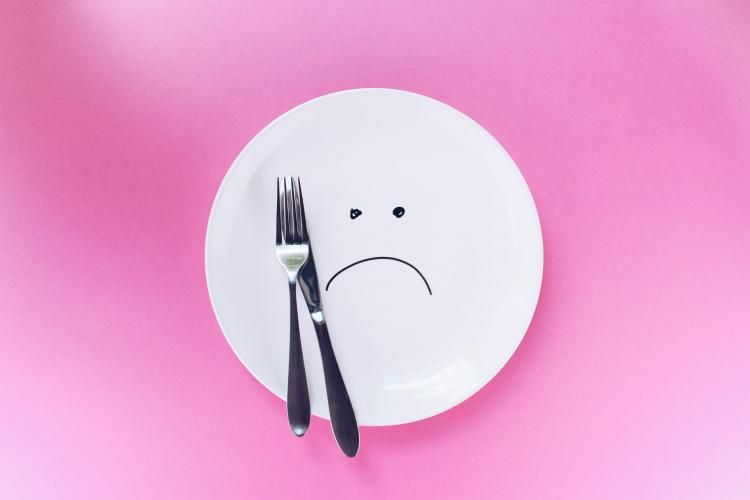 To Eat or Not to Eat

When I was eighteen, I started hearing from my parents and some family members that I was overweight. They’d bring it up a few times a week. They’d ask me whether I was sure I wanted dessert, and whether I had exercised that day. I’m sure my family thought they were being encouraging, as none of them would ever knowingly do something to harm me. And none of that ever bothered me—until it did.

Comments like these often seem harmless, but can silently destroy someone’s self-confidence and  encourage them to engage in extremely harmful behaviors. In my case, these behaviours eventually developed into an eating disorder.

From anorexia to bulimia

Motivated by my desire to lose weight, I began to exercise more and to restrict my diet. I started keeping track of my weight and of the many numbers on the treadmill’s screen. Meals were no longer about flavours and gatherings, or about cooking and experimenting. Eating became all about numbers. I stopped listening to my body’s internal cues of hunger and allowed labels and numbers on scales to dictate what, when, or if I ate.

I stopped listening to my body and allowed numbers on scales to dictate what I ate.

But the symptoms of eating disorders (EDs) are rarely static. It’s very common for patients with anorexia nervosa to also develop bulimia nervosa. Sophie Deram, a dietitian who works with EDs in São Paulo, Brazil, made a very interesting analogy: restricting food is like holding your breath for too long. Eventually, you’re going to need to gasp for air. If you restrict your food intake, you’ll likely end up eating a large amount of food to make up for that deprivation, a.k.a. bingeing.

I was no exception. During my anorexia, I not only restricted the amount of food I ate, but also the type of food: for example, I wouldn’t allow myself to eat a single bite of chocolate. Over time, that restriction only led me to lose control, and I found myself devouring enormous amounts of chocolate within a couple of minutes. Later on, I started engaging in purging behaviours – which only increased the frequency of my binges and trapped me inside a vicious cycle.

Living with an ED as a dietitian

When I was diagnosed with anorexia, I was studying International Relations in university. But after receiving my diagnosis, I decided to abandon my major and pursue a degree in nutrition instead, with the hope that I could help others who also struggled with EDs.

In Brazil, there are still very few professionals who choose to focus on EDs. I remember I was one of the two students in my class who wanted to work in the field. Surprisingly, my undergraduate program didn’t even offer any courses on EDs. Dietitians were—and still are—graduating with little knowledge about these illnesses, which is extremely worrisome. Until not too long ago, we had only two inpatient programs in the country: I was hospitalized in one of them, and can say firsthand that they were terribly unprepared.

I had an urge to study nutrition, fully understand how the body works, and be able to help patients who struggle with food and body image. But I also had another, more secret motivation. By studying nutrition, I could learn about which foods to avoid and how to reduce my calorie intake. Deep down, a small part of me was certain that becoming a professional in the field would help me lose even more weight. It didn’t.

Letting go in order to heal

It took me a long time to realize—and I’m still in the process of accepting it—that working in the field and reading so much about nutrition would make it very hard for me to recover. Halfway through my Masters’ program, being very close to doing research with the best psychiatrist in the field in Montreal, I gave it up.

I still think about it frequently—still ask myself whether I made the right decision. I was passionate about it and worked hard to get to where I was. But my therapist is helping me see that my passion for working with EDs doesn’t have to end, and that there are many other ways I can help people.

Speaking openly about it is a great way to help, and I don’t have to be fully cured in order to do that. In her book Rising Strong, lecturer Brené Brown speaks about vulnerability and “throwing ourselves into the arena.” She points out that people often give talks about their battles once they’ve recovered to share how they succeeded. Rarely, however, do people open up while they’re still in the middle of the storm. But even though these stories don’t have a happy ending—at least not yet—they’re just as important as the ones that do.

So here I am, far from being cured (or so it seems, at least) but ready to share, answer any questions people might have—whether they’re a patient themselves, a relative of someone who has an ED, or simply someone who is interested in learning more about the illness. By speaking up about EDs, we can wear down the stigma that surrounds them and learn to give better help to the people who need it.

Márcia Ramos is from Rio de Janeiro and currently resides in Montreal. She gave up a career as a dietitian in order to pursue her dream of becoming a writer. Márcia still wishes to use her knowledge of nutrition and her firsthand experience with eating disorders to help others who struggle.