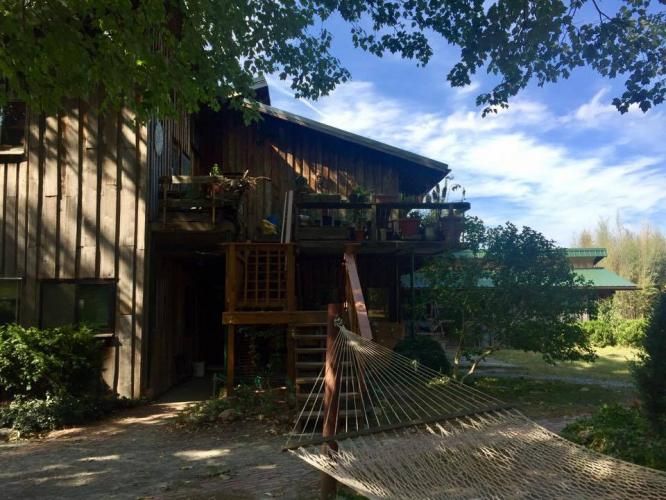 Lessons from an Original Hippie Commune

It was a series of seemingly inconsequential events that led me and two of my traveling comrades to the Twin Oaks Community in Virginia this July. An underestimation of the drive from Philadelphia to Asheville, a cancelled Airbnb reservation that opened a room  up for our last minute snag, a casual conversation with the Airbnb hosts, the revelation that they used to live in a hippie commune, the chance that the conversation took place on a Friday night and the weekly tour of said commune took place every Saturday afternoon.

Then we found ourselves under the scorching Virginia sun in the bold heat of the afternoon, at the entrance to one of the original hippie communes from the 60’s. I was thrilled to be there. Since living in an intentional community in the Panamanian jungle this winter, I have begun to explore different ways of organizing society and different ways of living. As we had just embarked on our cross-USA road trip, this commune seemed like an ideal place to begin.

We were led on a three-hour tour by Pamela*, a woman in her sixties who had been living in the community for several decades – “not a true cradle-to-grave’r” since she was not born there, but she does intend to die there.

We began the tour in the tofu manufacturing area. Many of the communes that began in the 60’s have since died out – largely due to an inability to support themselves financially. Twin Oaks has been successfully supporting itself since 1967 through production of hammocks, furniture, and most recently tofu, which we were informed with a great sense of pride. They are currently in the process of switching over to more modern machinery, which as a community they had saved up for collectively and are thrilled to have since this will drastically reduce the labour requirements and make the entire process more efficient.

Twin Oaks, we were told, is an income-sharing, egalitarian community where each adult member is required to work 42 hours a week. Each member receives housing, food, healthcare, and a small monthly stipend of US $100 that they can spend however they like. There is no leader – decisions and regulations are established democratically by various elected committees. There is also no specific group religion or ideology and the community is accepting of all ages, races,  genders, and sexual preferences.

For many of us, working 42 hours a week for $100 a month seemed tremendously menial. However, Pamela reminded us that they have virtually no living expenses and they can spend those 42 hours doing whatever work they like. This was another difficult concept to grasp, but Pamela explained that there is a master list of daily and weekly tasks that must be completed and the scheduling and selection of these tasks takes place the week prior by means of having everyone fill out a timesheet identifying which areas of work they plan on attending to. With approximately 85 adults, there is enough diversity of interests that every task gets completed, “Yes, even the toilet duties” Pamela kindly responded. They use a bulletin board to communicate whether there are tasks or chores that need extra hands.

An afternoon in the Twin Oakes commune

We were then led through one of the kitchen and dining areas. Meals are prepared for the entire community three times a day by whoever signs up for culinary duty. Everyone has the option to eat with the group or cook for themselves, but Pamela pointed out it is quite a luxury to have each meal cooked for you. There were some delicious looking baked goods cooling on the kitchen counter and though I hoped we would be offered one in a gesture of communal hospitality, we were shuffled onwards to the living quarters.

The living quarters were quite rustic and filled our noses with a musty odor that reminds one of the passage of time. Each person had their own small room, but the acoustics of the building invited one to believe there was not much privacy. The edifice was lit primarily with natural light, that reached even the lower levels through a small series of tunnels that funnelled the sun down from the roof. This as well as expendable glass roofing that lets heat in or out depending on need was part of their architecture design that strives to keep energy usage at a minimum. Pamela was particularly fond of these features and expressed frustration that these techniques are not widely utilized in western home design.

As we moved through their grounds and buildings, we passed many of the residents. Most offered up a quick, non-decorative ‘hello’. There were mothers with young children, older adults, and young adults. I think by many western standards, most people appeared to be “doing nothing” – sitting on swings, lounging on couches, playing in the grass, gathered around in various living quarters. It speaks to the environment I grew up in that something about their protracted pace made me feel uneasy, almost anxious.

We ambled past a building that used to be what was explained as the children’s quarters. In its early days, the community raised their youth as a collective, meaning that the children were the community’s children, not their parents’.  The children were all housed together and the adults would alternate “child duty”. This sharing model was apparently too difficult for the blood parents of the children. The community has now adapted their approach to giving the parents more autonomy in their children’s’ lives, but still having the community play a major role in childrearing.

At the end of the tour, my head was still spinning from questions that only naturally arise from being exposed to a way of life that differs so remarkably from the one you are familiar with. Are people happier here? Does everyone get along? What about sex? Pamela graciously answered these and my take on her responses as well as my impressions from the visit as a whole are as follows:

The people of Twin Oaks are happy. They aren’t particularly friendly to outsiders, yet I can’t say that I would be either if I had weekly visitors inside my humble abode. Their lives are more simple in some ways yet much more complex in others. They have to be active agents in all areas of life. They are part of many processes and decision-making areas that simply aren’t necessary for people living in cities. For example, they don’t have to commute an hour to go to work, but they do have to collectively agree on whether the money coming into their community should go towards field trips for the children (who not everyone has) or towards modernizing their machinery (which not everyone works with). Though they are a peaceful community, conflicts and tension among members is not uncommon and can be difficult given the small amount of people in a closed environment. The community has a sex positive attitude; sex and relationships between members do occur and a variety of human relationships exist including monogamy, open partnerships, polyamory, etc.

Overall I found the experience extremely enlightening but slightly too radical for my personal lifestyle preferences. However, I believe each intentional community has something to teach, and I highly encourage all readers to begin looking online to see which communities exist around you and schedule a visit if possible. We can all learn from exposing ourselves to lifestyles and ways of living that starkly contrast the ones we know and are comfortable in.

Check out: ic.org to learn more about intentional communities and to see what is around your area!