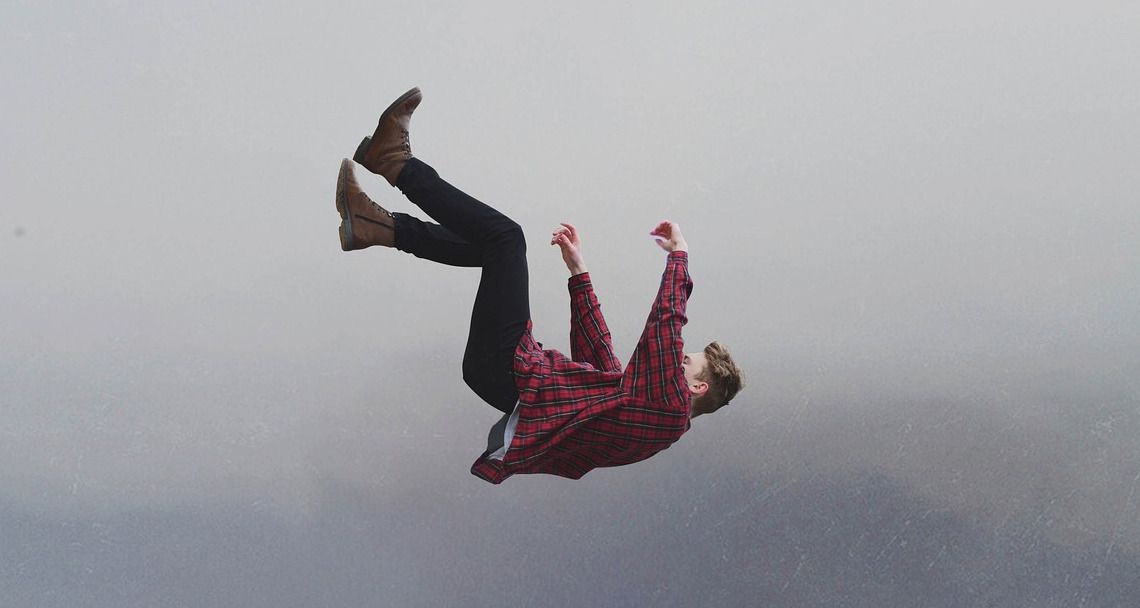 Falling out of Fear

Most of us enjoy doing things we’re good at, and there are plenty of reasons why! Practicing already well-honed skills gives us a sense of achievement, praise and admiration from peers, and it can bolster self-esteem.

However, many experts agree that trying new things – things you might not immediately excel at – is essential to personal growth. As Jake the dog once wisely said, “sucking at something is the first step to being kinda good at something.”

But people don’t like being bad at things. Fear of failure is one of those universal truths of the human condition that we can all rally behind – like how mistaking raisins for chocolate chips is terrible, even if you like raisins. We stick to what we know because it’s safe and comfortable.

But failure is inevitable. Even if you spend your life trying to avoid any activity where you might perform badly, you’ll fail eventually, and if you haven’t learned how to cope with it, it will hurt a lot.

As a self-proclaimed couch potato with a fear of heights, bouldering was not something I expected to excel at. I’d come to see myself as the kind of person who was just bad at sports, and I didn’t think I could enjoy doing something I would be so awful at. Instead I sought pleasure in ‘safer’ interests like reading books and getting good grades, because I knew I was good at those.

When I started, and for a long time after, I was pretty terrible at bouldering; my arms were too weak, I struggled just to lift myself a few inches off the ground, I fell constantly. There was something very discouraging about trying to climb the same wall a thousand times and falling on your butt over and over and over again.

A person standing on top of a mountain is an universal symbol for success, so losing my balance and lying on the mat with the wind knocked out of me felt very much like failure.

Fear of failure keep us from trying new things, but we’ll never be able to avoid it completely. Eventually we all fail at something, so why not embrace it?

For many people, failure is this monster that they don’t even dare to look in the eye – the Big Bad, That Which Must Not Be Named. We can’t even think of what we would do if we encountered it because that is simply not an option; all we can do is avoid it at all costs.

Over time, bouldering became a form of exposure therapy for my fear of failure. I’d been limiting myself to ‘safe’ activities for so long that I had to rediscover how it felt to be really, really bad at something. It was a humbling experience, to say the least.

Yet, it strengthened my confidence.

If at first you don’t succeed

When I first started bouldering, I was absolutely terrified of falling. It’s amazing how fast that fear went away. It’s never completely left me, but it has shrunk to a mere spark of nervousness (something that could almost be mistaken for excitement) in the pit of my stomach. When you confront something that you fear over and over again, you eventually habituate to it and the stimulus loses its emotional charge.

That’s what happened to me with falling. I was falling so much that when I fell my reaction became, “meh”, and I decided it didn’t make sense for me to be afraid of it anymore.

If falling = failing, I was forced to face failure over and over again. I couldn’t shut my eyes to it anymore. Instead, I lay on the mat – still dizzy from my fall, but otherwise unharmed – and thought to myself: “I have failed. What now?”

The biggest lie that fear tells us is that everything ends once you fail. In our frenzied race away from failure, we don’t imagine anything beyond it – it’s just a cloud of blackness that obscures everything that follows. When we find ourselves paralyzed by fear, we are unable to plan ahead because we don’t see ourselves as capable of dealing with the aftermath. Fear is the sensory overdrive that cuts thinking short.

Once you’re on the other side of failure, you realize that things are quite different. After each fall, I was still in one piece. I got to ask myself, “What now?” I could get back up. I could give that wall another try. I could take a break, get some water, then come back. I could go climb some easier walls for practice. I had a lot of options to move forward.

Failure is not just something that happens to us; it is something we respond to. Only when we find ourselves on the other side of it do we discover that we have many options to (in this case, literally) fall back on. It makes you feel a lot stronger to have confronted failure and learned how to deal with it, than to avoid it helplessly, hoping that it will never cross your path.

So why not try failing? Is there an activity that you’ve always wanted to try, a skill you’ve always coveted, a job you’ve wanted to apply for, that the fear of failure held you back from? Embrace the fear and possibility of failure. Ask yourself, “What now?”

Want to get something off your chest?
Book a free vent session today