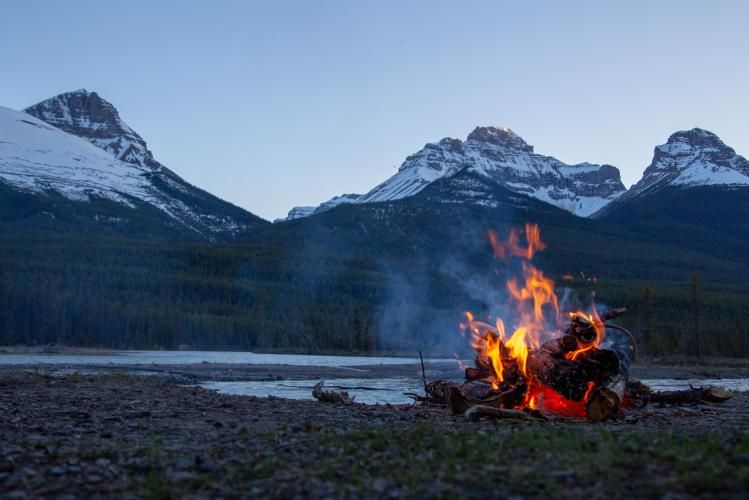 Distress Tolerance, or the Art of Sitting in the Fire

Experts have written extensively about why we should make a conscious effort to implement distress tolerance in our daily lives. But for all its effectiveness, distress tolerance doesn’t come easy to a lot of us. So why is it so bleeping hard?

One reason that some of us struggle with distress tolerance is that we unconsciously expect a third step in the process. Recognize feelings? Check. Accept them? Check. …Get rid of them?

We all assume that the end goal is to make the distress go away. This makes sense: no one wants to spend all their time cautiously staring at their bad feelings like that stranger on the bus who smells funny. But distress tolerance is about learning how to manage our emotions, not getting rid of them.

Recognizing and accepting bad feelings isn’t easy. In fact, a lot of people deny their emotions until they have no other choice but to face them; and then they work themselves into a frenzy to make them go away. Most of us have a “yuck, get it off” mindset towards emotional distress – like a knee-jerk reaction to seeing a bug crawling on your arm.

This kind of behavior speaks to a deeply ingrained belief that it’s not okay to feel bad; that being sad, angry, or anxious is somehow unacceptable. Again, it’s understandable that we would make that association: humans like comfort. We like comfort so much, that we’ve made ourselves ashamed and afraid of not feeling comfortable.

But maybe we should all get a little better at feeling uncomfortable, because we’re all going to go through uncomfortable times. If you want to spend a nice sunny afternoon in the park, chances are a bug will land on you at some point. We will all feel sad, angry, anxious, and all of the other feelings. If we try to numb ourselves to the negative emotions, we typically numb ourselves to positive ones as well.

Making peace with uncomfortable emotions can be challenging. But the more you’re able to sit with them and let them pass, the better you’ll be able to handle negative emotions in the future.

And guess what? that’s okay! Humans are built to survive pain and grow from it. Pain doesn’t have to destroy us, so we shouldn’t exhaust ourselves trying to resist it only to be left with no more strength to actually endure it.

So, it seems pretty clear that trying to ignore your bad feelings away is not a good idea. That being said, what if you fall into the opposite trap?

Sitting in the fire without stoking the flames

Rumination is a nasty ingredient of several mental health conditions, including –you guessed it – anxiety and depression. It consists of dwelling endlessly on your negative thoughts or feelings, which results in you feeling worse. Facing your feelings and looking at them straight on sounds fine and dandy, but what if you find yourself unable to look away?

You’ve probably heard distress tolerance being described as “riding the wave” of emotional ups and downs. But not long ago, I stumbled upon another term that better encapsulates my personal experience: “sitting in the fire.” To me, that’s exactly what it feels like: trying to sit still while convincing yourself that it is, in fact, okay to be on fire. (Note: this is to be taken on a purely metaphorical level).

And because I’m a restless ball of anxiety, I struggle a lot with sitting still. I want to feel like I’m moving towards something, because that’s how I see progress. The frustration of not moving can get so grating that I actually stop caring about what I move towards. I often find myself either running away from the fire (i.e. denying my feelings) or walking deeper into it, hoping that if I stoke the flames, it’ll make the fire burn itself out quicker (i.e. rumination).

It takes a lot of time, patience, and courage to learn how to sit still.

But as awkward as it feels, it actually works: I promise that eventually, that fire will dwindle to ashes.

I don’t have the secret to mastering distress tolerance; that’s a skill I’m trying to work on every day. In my efforts, I’ve found that practicing mindfulness really helped. Mindfulness often comes hand in hand with meditation: this can include breathing techniques and visualization exercises, like picturing your feelings as leaves falling into a stream. They’re there for a moment… then they drift away, and others come.

The more you’re able to sit with your feelings, the better you’ll be able to handle discomfort. Especially when you know that you’ll feel differently soon.

Even if meditation isn’t your cup of tea, you can benefit from the core belief of mindfulness: that nothing is as fleeting and ephemeral as a feeling. No matter how intense it feels, it’s not going to last forever – which, when you’re feeling badly, is a huge relief.